What is Craniosacral Therapy? 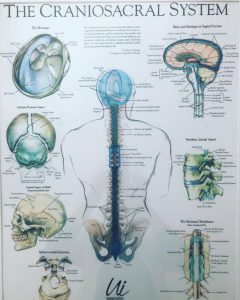 Craniosacral Therapy (CST) is a gentle, hands-on method of evaluating and enhancing the craniosacral system. The craniosacral system is a physiological system within the body. It is comprised of the structures that support the brain and the spinal cord, namely the membranes, the cerebrospinal fluid and the bones surrounding them. It is client led, which means your body is encouraged to tell its own story and from there a treatment plan is formed. So, there is no therapist led set formula to treatment. Each treatment is unique and is not only focused on the site of the symptoms but rather on addressing the cause. By lightly resting the hands on various areas of the body, a trained therapist can detect disturbances in the craniosacral motion caused by restrictions in the dura (membranes that surround the brain and spinal cord) or fascia (tissue that surrounds all soft tissue and organs). By softly facilitating small movements and unwinding, the body releases these stored up restrictions and traumas.

It’s not new at all, like Physiotherapy it dates back to the early 1800’s. It comes from Osteopathy. The first school of Osteopathy was started in 1892 by Andrew Still in Missouri, USA. His dad was a physician so he was often hanging around the hospital/ his father’s surgery. He discovered that he was able to change people’s physiology by laying his hands on them. Some people changed a lot, and some just a little. But he believed that the body needed to work together to achieve its highest form of health. He was so successful in some cases that they had to alter the train routes and build a boarding house in Missouri to cater for all the people seeking treatment with him.

In early 1900 William Sutherland was a student at USA school of Osteopathy. He became fascinated with the design of the human skull. Despite being taught that the skull bones were fused he believed that the shapes and the sutures of the bones indicated movement. (Interestingly in early 1900s in Italy they believed that if the skull was fused it was pathological). Sutherland was able to palpate motion of the cranial bones. He was even able to palpate a correlation between the occiput and the sacrum via the dural attachments.

Then in the late 1900’s John Upledger, an MD and was asked to assist a neurosurgeon during the removal of a calcification on the dural tube. The patient was sedated, and all Dr Upledger had to do was to hold the spinal cord still. He was unable to keep it still and he realized it was moving rhythmically 8 cycles/min. This rhythm was not in sync with the breath or cardiac rhythm. After the surgery he did some research which led him to osteopathy and Dr Sutherland’s theory. From 1975 to 1983 he worked at the Michigan University where they were able to prove Dr Sutherland’s theory of the cranial bones moving. This is how craniosacral therapy was born.

What conditions can you use CST for?

How many sessions do you need?

Each person is unique and responds differently to treatment, no matter whether it be CST, manual therapy, needles etc. So there is no definitive answer to this question for any treatment. Many people feel a change, for the better, after the first session, while others can take 2-3 sessions to feel any shifts. We would suggest that you try at least 3 sessions before determining whether CST is the treatment of choice for your body at that point in time. Remember that often to heal the body we have to treat not just the symptom but the underlying causes of those symptoms- hence treatment often extends past one session.

Physio Cape Town is situated within the City Bowl, in the quiet suburb of Gardens.

Friendly staff, combined with off street parking, clean shower and bathroom facilities, as well as beautiful waiting areas in both the reception and courtyard areas, all help to ensure that your time spent is of the utmost in both healing and comfort.